Which type of business is more likely to thrive when economic times are as tough as they are today - the Davids or the Goliaths?

The smart money, according to a trio of gutsy Ontario entrepreneurs, is on humble, nimble upstarts, not the bloated corporations that are now dominating grim headlines.

Christopher Sheedy's belief in that proposition is so strong he recently quit his steady job as membership director of a not-for-profit association to launch his dream venture. It is Re:Reading, a purveyor of used books, DVDs and CDs that's set to open on Toronto's bustling Danforth Avenue this week.

"Working for myself, and specifically having my own second-hand bookstore, had been my dream for more than 20 years," Sheedy explains.

So, when all his financial ducks were lined up - including acquiring more than 16,000 titles inexpensively from Internet site PennySaverusa.com, and finding what he considered the perfect, 1,600-square-foot storefront location, he decided it was time to hit the go button.

The optimistic entrepreneur believes the current economic downturn will actually complement his business model, and also help his customers endure financial hardship. "Because I'll be buying books as well as selling them, [patronizing] Re:Reading will be a way for people to use their own assets to help themselves financially."

Not only didn't Sheedy let gloomy recession talk scare him into postponing his dream, he says he's hoping to set an example for other would-be entrepreneurs. "Even in this economy, there are definitely business opportunities available, and I hope to inspire others, including those who've been fired or laid off, to make the leap into something that excites them."

Wasn't today's infamous credit crunch a problem? Not at all, says Sheedy, who adds that a bank actually offered to finance Re:Reading's start-up before he decided to avoid debt by self-financing the store with his own savings.

Access to credit also proved to be no obstacle for Bryan Freeman and Joel Auge, partners in a social networking development company called HitGrab. 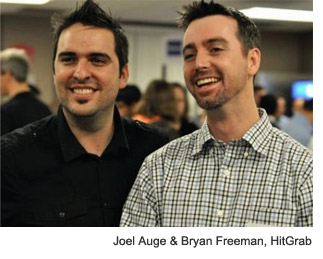 In fact, after creating an online game that's strikingly unlike most others in that crowded arena, the Burlington, Ontario based company ended up beating out nearly 600 competitors for U.S. $250,000 in seed money from Facebook.

The game is MouseHunt which, says Freeman, is "not the sharpshooter type of thing kids play. It's a non-traditional, passive model for people with busy lives who just want to take some action and then let the game do all the work. MouseHunt has a reward system where you catch several different kinds of mice that then become trophies and collectibles, and it's intensely social, with people from around the world interacting with each other."

Freeman adds that the game has proven to be so successful in its first four months that an average of 145,000 people, aged 18 to 65, are currently playing it on a daily basis.

All that activity is proving lucrative for HitGrab. Although unwilling to disclose actual revenue, Freeman says the non-advertising strategy he and his partner chose for MouseHunt - namely, allowing free play but charging fees for "premium cheeses that attract the most mice" - is paying off. "We've been able to grow our team to a dozen, and to hire skilled artists to create more and more attractive mice."

Small wonder, then, that Freeman says he has no qualms about launching a small business in a recessionary climate. "I think social networks are changing the way the world does business, so it's giving small companies like ours the opportunity to reach massive global audiences, which was impossible just a few years ago.

"So," concludes Freeman with evident satisfaction, "we 'Davids' are now able to compete in a world that used to be dominated by 'Goliaths.'"

Terry Poulton is a freelance writer in Toronto, Canada.