Battle of the Sexes: men, women and professional networking

A rather provocative study that was recently conducted indicates that in general men are "savvier" online professional networkers than women.

Done by LinkedIn, the largest professional networking site in the world, the study aimed to flesh out the differences between men and women in the arena of networking professionally online.

The results collected were based on an online professional networking "savviness" ranking developed by LinkedIn. Through this method, the site found that both globally and in Canada, men on average are slightly more savvy professional networkers than are women.

LinkedIn defined savviness based on a ratio of the connection that men have to connections that women have and the ratio of male members on LinkedIn to female members. 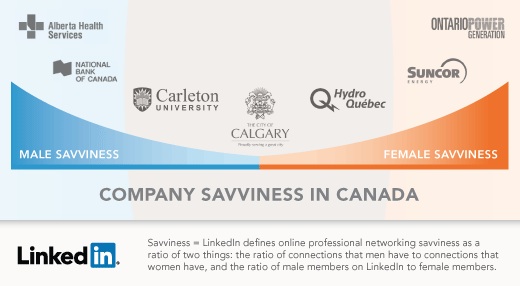 Regardless of sex, business professionals everywhere realize the importance of networking online, especially when tight schedules permit only limited opportunity to meet in person.

"Making connections and building solid relationships is crucial to business growth," said Donna Messer, networking expert and owner of ConnectUs Communications. "As a businesswoman and entrepreneur, I don't always have time to meet everyone face to face and networking online…has given me visibility and credibility. I encourage women to consider LinkedIn as a place to find common ground with their business contacts and to build relationships that will ultimately lead to career success."

And many women are. Though the study says men are "savvier" in general, it also indicates that women outperform them in certain areas. When divided by industry, the data shows that women come out on top in a number of professional fields.

Top Canadian industries where women are savvier than men:

Top Canadian industries where men are savvier than women:

The study also found that in Canada men and women were equally savvy in the areas of architecture and planning, furniture, market research, ranching and public safety.

For more details on LinkedIn's "Battle of the Sexes," visit the LinkedIn Blog. http://lnkd.in/men-vs-women