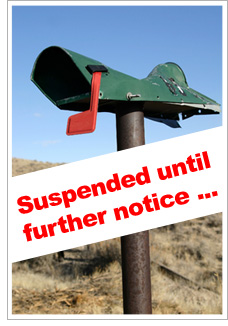 When it comes to their opinion on how the Canada Post strike lock-out affects their businesses, Canadian small business owners have changed their tune.

CanadaOne has seen a major swing in the perception of Canadian small businesses that participated in our Canada Post Strike survey.

While the impact on efficiency remains the most cited negative impact (80 per cent), what is interesting is the sharp increase in the number of small businesses that have now said the strike negatively affects their ability to get paid.

After June 17, at the end of the week when mail delivery was completely stopped, this number increased to 82 per cent, a jump of 27 per cent that happened almost overnight.

Here are some additional key findings from our postal strike survey.

Eighty five per cent of respondents said that their businesses are being negatively impacted by the postal dispute, noting that they rely on the mail to conduct many business functions.

While getting paid and efficiency top the list of concerns, small businesses cited impacts in every survey category, reporting a negative impact on:

Also notable was a tendency in some categories, such as invoicing, for respondents to either strongly agree or disagree, with only a few respondents having a moderate view.

Many respondents noted that they would be seeking out alternatives to Canada Post's services.

Interestingly, almost 80 per cent believed that people who turned to alternative payment and invoicing options will keep using them after the conflict ends.

The most popular alternative noted by respondents was the use of other courier services, with 81 per cent saying they have used or considered using them.

However, many respondents have also expressed concern with the price tag for these services, with some claiming that they turned to them out of necessity, and others saying they are not a financially viable option.

"I can't ship a single item without Canada Post... I can sell my product in shops, but all my online sales will plummet as I cannot afford to ship my $30-$40 product with a $20 courier shipping fee," one respondent said.

A handful of greeting card, mail order and online businesses have expressed similar concern, and appear to be the most heavily affected by the postal dispute.

Despite the headache that the Canada Post strike-turned-lockout has caused, it looks like Canadian small business owners can finally breathe a sigh of relief. With back-to-work legislation tabled in Parliament on Monday and currently in debate, mail service could potentially resume as early as the end of the week.

The survey also indicates that business owners have strong opinions about the status of Canada Post services and back-to-work legislation:

The survey, conducted by CanadaOne over the duration of the postal dispute, aimed to quantify the impacts of the conflict on small businesses within Canada.

The sample size of the survey was 88, and consisted of people who operated small businesses based in Canada. Though it was not a random sample, participation in the survey was open.

CanadaOne will continue the survey until the strike ends. Please click here to participate and share your views!