Workers turn to flirting as technology malfunctions in the office 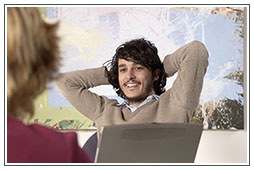 It's no surprise that when technology breaks employees feel stressed. A recent survey by Toshiba Canada found that 40 per cent of Canadians cited malfunctioning technology as their top office complaint.

And as the device size shrinks, stress seems to rise.

"It is not surprising that 62 per cent of Canadians find work stressful.  What is surprising is the number of respondents who attribute their stress to workplace technology," said Melissa Moore, Social Media and Communications Manager at Toshiba of Canada. "Technology should make your life easier."

Much less expected were findings that almost a third of coworkers use flirting to reduce office stress and 11 per cent of men have used broken technology as an excuse to flirt with a colleague.

If you are a tablet user, your chance of having an office romance rises dramatically.

Twenty seven per cent of tablet users reported that they had engaged in an office romance, which was almost twice as high as the national average of 15 per cent.

Yet there may be more than just the device type behind this pattern. The majority of tablet users are between the ages of 18 to 24, with the remainder divided pretty evenly amongst other age groups.

Just over half of respondents (52 per cent) said that technology breakdowns take away from their other work responsibilities.

A quarter of employees have missed a deadline because of a technology malfunction and 57 per cent believe that their boss would accept a breakdown as a valid excuse for the missed deadline.