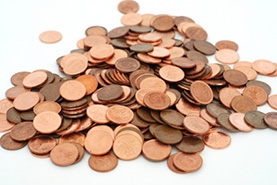 As the Canadian Royal Mint stops distributing the penny effective today, INTERAC® has issued a news release assuring Canadian consumers and businesses that their transactions will not be affected.

The loss of the penny will affect cash transactions as the currency is phased out of use. If a business cannot provide exact change to the penny, it is required to round the transaction amount to the nearest five cent increment.

For non-cash transactions, including cheques, debit cards, credit cards and online payments, the original transaction amount will be preserved, to the penny.

In other words, if you do an in-store transaction for $1.08 and the store owner cannot make change, you will be charged $1.10. However, that same transaction done electronically will result in a charge for the original $1.08.

Here is what businesses need to know as Canada transitions to a “penniless” nation:

The main reason for the elimination of the penny was cost. The decision to pull the penny out of circulation is expected to save the Canadian government approximately $11 million a year.