In our modern knowledge era, being able to innovate relies on our ability to unlock the power of the human mind.

Yet without even realizing it, many businesses may be sidetracked by preset ideas of their owners and employees. 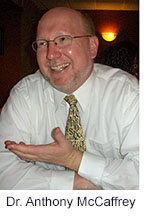 Dr. Anthony McCaffrey, a postdoctoral research fellow at the University of Massachusetts's Center for e-Design, has developed an Obscure Features Hypothesis (OFH) that he believes has led to the first systematic approach to breaking down the innovation process.

CanadaOne recently caught up with McCaffrey to learn about functional fixedness and how businesses can become more effective innovators.

When we look at an object, we see what we expect. This tendency to fixate on the common uses of an object is our "functional fixedness".

"Functional fixedness is the most famous cognitive obstacle to innovation," says McCaffrey. "We have an automatic response to the common objects around us. When we see a plastic lawn chair, for example, the motor cortex of our brain automatically prepares our legs to bend to sit in it."

McCaffrey explains that while functional fixedness is helpful in our everyday lives, it also inhibits us, filtering out other possible uses an object might have.

"For example, we could use the plastic lawn chair as a paddle (turn it over, grab two of the legs, and start rowing). However, the automatic meaning we give to the chair may hinder us from coming up with a new way of interacting with the chair that could lead to a new use."

The idea that we have two thinking systems, one that is fast and automated, and another that is slow and requires applied thought to reach an answer, is very well described in Daniel Kanheman's book Thinking: Fast and Slow.

There has been some buzz recently about which thinking system is best when approaching innovation.

On a recent Twitter chat on innovation (#innochat) the topic discussed was how fast and slow thinking impacted innovation. Many participants noted that they approach innovation by starting with fast thinking, which they felt was more creative, and then switched into slow thinking mode.

Yet McCaffrey's research indicates that starting with fast thinking in innovation may have the opposite effect.

"Daniel Kahneman's book Thinking Fast and Slow articulates many more examples of how our fast thinking can, in certain circumstances, move us to make incorrect judgments," says McCaffrey. "Functional fixedness is just one example of how fast thinking can mislead us."

Because fast thinking leads us to common answers, if we want to be creative we need to engage in slow thinking.

McCaffrey explains that the most basic principle of his work is the "obscure features hypothesis".

The essence of the obscure features hypothesis is that if a problem remains unsolved, then something important to the solution is being overlooked.

"I would claim that all innovative solutions to problems are built upon at least one obscure feature of the problem," says McCaffrey. "So, seeing obscure features is the foundation of innovative problem solving."

The invention of Velcro is one of many examples.

When George de Mestral returned from a walk in the woods with burrs sticking to his clothing he didn't see burrs that need to be plucked off, explains McCaffrey, but rather two things fastening together. Mestral's subsequent study of the ways burrs fastened together led him to create Velcro.

George C. Balas, Sr.'s invention of a weed trimmer that could be used around trees without damaging their bark was based on using spinning nylon, an idea that came to him after watching spinning nylon bristles clean his car at the local car wash.

In the Titanic disaster, seeing the iceberg differently might have led to a temporary escape route.

"Instead of seeing the iceberg as a sinker of ships, the crew of the Titanic might have envisioned it as a large lifeboat," says McCaffrey.

"Describing it generically, the iceberg was reported to be a large floating surface 50-100 feet above the water and 200-400 long. If the crew saw this soon after the collision, they could have navigated their wounded ship alongside the iceberg so that people without lifeboats could have climbed onto the iceberg in search of flat areas to stay out of the water for the four hours until help arrived."

Describing objects more generally helps uncover new and less than obvious ways to use the object.

McCaffrey's process for innovation is based on breaking an object down into generic parts, which helps to lead us away from our assumptions about how that object can be used.

"If we tend to fixate on an object's use rather than the object itself, then the idea is to systematically strip away the preconceived uses part by part until we are left with descriptions that are so generic that they do not imply a use. In this way, more of the "raw" object comes into view," says McCaffrey.

He explains how his "generic parts" process would work for a candle.

First, the candle is broken into two parts to be considered separately: the wick and the wax.

To get away from the idea that the wick is used to create light, which is a strong preconceived idea that makes it difficult to spot other uses, McCaffrey gives it a more generic description based on its shape and material. The wick is re-described as a "long string".

"Immediately, a new use for the wick emerges," says McCaffrey.

"We could use it to tie things together if, in a pinch, we had no other options. We could scrape the wax away to free up the string. Since our new description, "a long string," also implies a use (i.e., tying things together), we continue by rephrasing it more generically."

Continuing the process of unraveling the object's features, McCaffrey next tries the description of "long interwoven fibrous strands," something he jokingly notes could be used to make a hairpiece for a pet hamster.

"Silly uses, I know," says McCaffrey, "but even silly uses are initially shielded from view when we consider the object to be a wick or a string."

Without breaking the idea of the wick down into an object made up of individual strands, we would not see some things the wick could be used for.

When the process reaches a completely generic description that does not imply any use on its own, we have reached the end of McCaffrey's process and could start on the next object: the wax.

The type of thinking needed to overcome functional fixedness is something that can be learned, says McCaffrey. Through his research he has developed about two dozen techniques that will help people see beyond the common uses of an object, with each technique designed to overcome a specific cognitive obstacle to being more innovative.

When hiring, is you want to test for a person's ability to see obscure features, a standard test is to ask the person to list all of the features, associations and uses for a particular object.

"This could be one gauge of a person's natural ability to see overlooked features, unusual associations, and novel uses," says McCaffrey.

What's next on McCaffrey's radar

McCaffrey's work is currently focused on being innovative with concrete objects and his techniques are designed to help engineers, designers, and inventor who work with physical objects.

He plans to include innovation around intangible things in his future work.

He says he will continue to test new innovation techniques to make sure they actually work, noting that functional fixedness is just one of many cognitive obstacles he has successfully countered.

Also in progress is the development of a software program that will guide people through his innovation techniques.

"I have found that even when given a technique to use by hand, people will still tend to get sloppy in its execution and fall back into their old habits," says McCaffrey. "Thus, they will miss many important features. The software keeps them on task and helps them not fall back into their habitual ways of seeing things."

Finally, noting that 90 per cent of unsolved problems have already been solved in another field, McCaffrey is developing software where a user will input an unsolved problem, with the software then finding patents from the U.S. patent database that might contain an idea that you could adapt to solve the user's problem.

"A ski company needed to get rid of vibrations in their skis at high speeds. Eventually, they stumbled upon a solution that they could adapt for getting rid of unwanted vibrations in violin strings," says McCaffrey. "My software could have found that analogous solution for them very quickly. Consequently, it could have saved them a great deal of time and frustration."

He notes that his software will be designed to break through the jargon-barrier that has previously prevented inventors in different fields from talking to each other. McCaffrey is beta-testing the software this summer.