What is Workplace Bullying and How Does it Affect People? 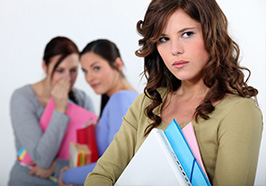 Workplace bullying is like bullying on the playground except that it occurs in the workplace.

It usually involves verbal comments and incidents that are intended to hurt, harass, isolate, intimidate, or humiliate a person. It is not new but has become what some have called a silent epidemic because it is happening frequently but isn't always reported.

It is estimated that as many as one in every six workers is bullied at work and it occurs more frequently than sexual harassment. Bullying creates a horrible, hostile and poisonous work environment that leads to severe problems.

Bullying can be obvious and subtle and may take the form of any one or more of these behaviours:

It is very important to understand that the people who are bullied are not to blame. The victims or targets are usually highly competent, accomplished, experienced and popular. The reason why they have been singled out for this upsetting and unfair treatment is due to the needs and personalities of the persons who are doing the bullying.

Ken Westhues, a sociologist at the University of Waterloo is survivor of academic mobbing (bullying in universities) and has become a recognized expert. He has developed this checklist of indicators.

How Does It Affect People?

The target of bullying may suffer from or experience a great number of symptoms all of which result from his or her treatment at work. The events taking place in the workplace are bad enough and very upsetting, but they can also lead to a number of physical, mental, emotional, social and financial problems.

Don't be alarmed by the list that follows. Victims do not suffer from all of these things but they could encounter any of them.

John Towler is the author of How to Cope with Workplace Bullying which can be purchased online here. Dr. Towler is a Senior Partner with Creative Organizational Design, a management consulting firm that specializes in employee testing and surveys. The firm has a test for everything and can test for salespeople, preselection, customer service, management skills etc. They design, administer and score a variety of surveys including attitude, customer service, marketing and web site popularity. Please send comments to Dr. Towler at jotowler@gmail.com. For more information call (519) 745 0142 or visit their web site at www.creativeorgdesign.com. You can also connect with John on Google+.