Crowdfunding: The Power of the Crowd 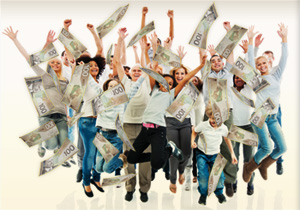 Crowdfunding is a “hot” way to raise money for “cool” ideas. Crowdfunding allows geeks, innovators and artists to connect with the online public to get products and ideas funded.

Recent U.S. legislation makes crowdfunding an action item. It looks like Canadian entrepreneurs will have their noses pressed against the windows of our U.S. neighbour before crowdfunding is legislated in Canada.

For entrepreneurs, crowdfunding offers a way to raise seed money via online communities. Crowdfunding calls on the power of online crowds of people to donate money to projects. Artists, innovators, and start-ups have successfully used crowdfunding to raise money for endeavours such as documentary filming, fashion design, research, or seed money. For example, MyMajor is a crowdfunding platform for musical artists based in Paris. It allows artists to get a first album cut and promoted. Crowdfunding has financed everything from indestructible, theft-resistant bicycle lights to 21st century wallets.Kickstarter is one of the most popular online crowdfunding platforms where entrepreneurs can pitch their fledging products to website visitors. Those who pledge money get something in return, typically a product sample.

How are valuations and “returns” calculated?

Crowdfunding sites such as Kickstarter offer a unique opportunity to entrepreneurs to test product concepts by getting quick product idea feedback. Projects are active for a set number of days, usually less than 60 days. It’s an all or nothing prospect, where the product goal must be hit or the entrepreneurs get nothing. If an individual in the online “crowd” wants to pledge $50 they will receive a product sample. It’s a great way to get “crowd” valuation, product-based pricing versus share price.

How crowdfunding differs from other sources of funding

Ask any entrepreneur about raising funding and you will likely hear stories of heroics and grief, and sometimes, a lot of desperation. One eager entrepreneur pitched his start-up idea on a SEC website that solicited input from the public on crowdfunding.

The pitch was taken down but the SEC did allow a shorter comment letter from the entrepreneur who wrote: "Please do not make regulations which require that start-up companies must in any way be dependent on qualified investors, business angels, venture capitalists, established interests or any others who may have sunk investment in existing technologies or businesses." Enough said.

Crowdfunding in the U.S. is an action item

The Jumpstart Our Business Startups Act, or JOBS Act, was signed into law by President Obama on April 5, 2012. The Act provides for smaller investments with fewer restrictions. The goal is help fledgling companies raise money via crowdfunding sites.

The next step in making crowdfunding a reality in the U.S. is for the Securities Exchange Commission (SEC) to set the specific rules and methods for the crowdfunding process to take place. The clock is ticking for the SEC, which has nine months from the signing of the JOBS Act (approximately 270 days) to make this happen.

Crowdfunding in Canada: “How can we stand silent for so long”

“We have looked at best practices internationally and most jurisdictions are building on digital initiatives,” says John Reid, president of CATA Alliance, who adds with emphasis, “Canada is moving in the opposite direction. CATA is unable to get anyone in the Federal government to respond.”

“How can we stand silent for so long,” says Reid. “We see the weaknesses in venture funding. Crowdfunding is a tool to bridge the gap. The provincial and territorial securities’ legislators hold the keys. However, the federal government is mute on the matter – both the Prime Minister’s Office and Industry Canada,” says Reid.

Reid points out that it is almost three years since the federal government has come out in support of the digital economy. Since that time issues have not made it to the federal agenda.

CATA is working to encourage thoughtful consideration of crowdfunding, particularly given what is going on south of the border, where crowdfunding is an action item, with the SEC actively working on oversight and governance wording.

“Our structures in Canada are not keeping up to support the opportunities that the digital economy is providing,” says Reid. “We can’t seem to do anything in real time. There is a hesitation to bring public policy up to speed,” says Reid.

“Despite all the discussion to encourage growth through innovation, there is not a lot of practical work being done in the trenches done to support it,” is the final word from Reid.

How should the issues be framed?

About Securities Legislation in Canada

Each province and each of the three territories in Canada has its own securities superintendent or commission that administers and enforces securities legislation for its particular jurisdiction.

There are often competing policy objectives between investor protection and efficiencies in capital marketsIn a recent request for input from the federal and territorial securities bodies, several individuals in the technology and funding sectors were dismayed with the direction of proposed changes.

According to a memo made public by Fraser Milner Casgrain LLP (www.fmc-law.com) a national law firm with venture capital and technology practices:

If a change is made to further restrict the AI exemption without a similar change being made in the U.S., we would be concerned that it would affect “angels” and “super angels” investing in Canadian start ups.

Changes that would require a “certification” would likely be “cumbersome”, FMC LLP stated in their memo. For example, a “certifier” might be required to review underlying financial statements and tax returns of the individual in order to satisfy himself that the (AI) qualification criteria are met. We do not believe this would be practical and would seriously impede the ability of an investor to rely on this exemption.

“We suggest that not only should you not be further restricting available exemptions, but you should be considering adding further exemptions, such as those relating to “crowdfunding”, in order to assist early stage companies in raising capital.”

If the AI exemption is amended, there is a concern that it would send the message that Canada is becoming a more difficult jurisdiction in which to raise start up capital. AI exemption works properly in its current form.

“Canadian companies are increasingly being required to compete for resources, including financial, on a global basis,” says Tom Houston, Chair of Fraser Milner Casgrain LLP’s Technology Group. It is very important, particularly in a North American context, that the regulatory environment in Canada not be seen to be more restrictive and less flexible than the regulatory environment in the U.S.

“In our experience it is clear that capital is increasingly difficult to attract for start ups,” says Houston. “We regularly see deals with all levels of capital formation from angel and seed funding to venture capital financing and public offerings. The financing outlook has changed dramatically in the last five to ten years. “Series A” rounds of financing were once broadly available from Canadian and U.S. venture capitalists they are far less common today.”

This means entrepreneurs must rely on Plan ‘B’ strategies for funding such as, angel or seed funding. In reality, this means start ups must seek financing from multiple sources to raise the necessary funding to develop and market innovative products. It is inefficient, time-consuming and comes with tremendous opportunity costs for most entrepreneurial ventures.

What to envision for Crowdfunding in Canada

Anticipate that crowdfunding legislation in Canada should mirror the U.S. legislation, says Houston. It would likely include:

It is this last point, the issuance of securities that is still being hotly debated in the U. S. Any proposed changes to Canadian securities law to permit crowdfunding will have to contain reasonable investor protection mechanisms in order to gain regulatory support in Canada, says Houston.

How can entrepreneurs make their views known?

Make your views known about the gaps you’ve experienced with funding in Canada. Contact both your local M.P.P. and your M.P. and urge them to take a leadership position in the funding issues fledging firms – that are the engines of our economy. Let these individuals know in your own words how this funding gap will affect Canada and our global opportunities.

Contact groups like CATA who are actively lobbying the federal government. CATA is working to turn up the volume on this politically. It doesn’t take a lot of insight to boost innovation through schemes such as crowdfunding.

Let the policy makers know we need to improve Canada’s innovative position – change our performance compared to other jurisdictions otherwise, there will be fallout in Canada in terms of the investment dollars we attract, people we attract and sales/productivity. We must continually work to keep attracting innovation and the funding that fuels it.