How can you use Facebook effectively to promote your business? CanadaOne caught up with John Shehata, the executive director of search and social media for ABC News, ABC Family and ABC.com, to find out what small businesses need to know. 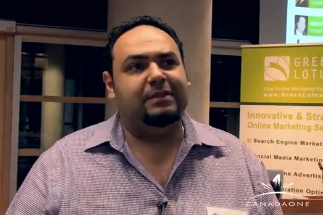 John Shehata is responsible for search and social media at one of the world's largest media companies: ABC News, ABC Family and ABC.com. In this exclusive interview with CanadaOne, John shares his insights into what small businesses should think about when using Facebook as part of their sales and marketing approach.

Here is the transcript from this video interview:

The most misunderstood practice about using Facebook for business is that you need lots and lots of fans to promote your business, that you need hundreds of thousands of fans.  That's not true. If you're a local business you can do with a few that are actually really important to your business.

Having a small campaign on Facebook – paid campaign – and then promoting your presence is more than enough, you don't need hundreds of thousands to promote your local business.

For local businesses one of the best practices or tactics for social media is to focus on engagement. As I mentioned earlier, people focus on the number of fans and followers, but Facebook had an EdgeRank algorithm which really focuses on how frequently your followers and fans engage with your content.

The most numbers of likes and shares we got out of a post was one about an elder couple that died together while they were asleep and it was very emotional. They were like about 80 years old, I can't remember the exact number… it exceeded 150,000 likes and it was a very big story for us.

Every now and then someone will say "hey, this specific social platform is dying, Facebook is no longer a valid place to invest your resources" – and I would say until it happens, ignore these kind of things.

Facebook is still the number one dominant social platform in the US, and I believe in Canada and around the world. If you look at the population of Facebook, it's the second largest country in the world. Very active users, users login more than once. Some studies show actually that they log six to eight a day with more than two hours of activity time on Facebook.

So Facebook is still out there and it's very active. We have all our information, we invested many years – seven or eight years – and we added photos and figures and we found our friends from college and high school and so on… so I don't think Facebook is going anywhere. I could be wrong, but until it happens I'm very skeptical about that.