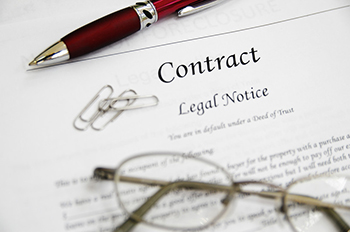 Business owners need to understand the importance of signing a contract. Without legally enforceable contracts, it would be almost impossible to conduct business in today’s marketplace.

Well-drafted contracts can give both parties peace of mind. They ensure the other party will fulfill their obligations. The true importance of a contract, however, is they help prevent conflicts down the road.

There are a number of common misconceptions about contracts that can lead to serious problems if the business relationship breakdown. Having a solid understanding of the way contracts work can help you to protect your business.

A Verbal Agreement Is Not Enforceable - FALSE. This is perhaps the biggest misconception that people have about contracts. Many businesses have tried to defend themselves in lawsuits for breach of contract by arguing that the contract itself was never signed.

As long as there was an offer, acceptance, and some compensation (what lawyers called “consideration”) was agreed on, the courts will enforce the agreement. However, it is important to understand that one of the difficulties of relying on a verbal agreement is that it may be difficult to prove in court.

An Advertisement Can’t Create a Binding Contract - FALSE. Businesses must be careful with the way they advertise or they may find that their advertisement has created a legally binding contract between them and their customer.

For example, if an advertisement specifies a price for an item and that this price is available on a “first come, first serve,” basis, the courts will likely uphold this as creating an agreement between you and your customer. If you refuse to honour the advertisement, the courts may enforce the terms of the advertisement.

A Contract is All the Protection You Need - FALSE. While a well-drafted contract can protect a business from a number of potential conflicts, it cannot provide protection in every instance. For example, many businesses and financial institutions will “secure” loans against the borrower’s assets in addition to having them sign a contract to pay back the loan.

Relying only on a contract in this situation would mean that the lender would have to go to the courts to get damages for breach of contract. This can be a protracted process that may never result in the lender getting their money back. If a loan is “secured,” however, the lender may seize the assets of the borrower to satisfy their debt.

Another example is intellectual property – court remedies for breach of contract cannot reverse a leak of confidential information. It is important to consider what other steps you may need to take to protect yourself in your business relationships.

A Signed Contract is Always Enforceable - FALSE. There are some instances where the courts will not enforce a contract which has been signed by both parties. In fact, there are a number of “defences” to a contract.

One such defence is “capacity to contract” – in order for a contract to be valid, both parties must have the capacity to contract, meaning that they are of the age of majority and have the ability to understand what they are signing. Another defence is that of undue influence or misrepresentation. If one party has exerted unfair pressure, used threats, or lied to get the other to sign the contract, the courts will likely refuse to enforce it. Finally, where the terms of a contract are grossly unfair and/or when there is a serious inequality of bargaining power, the courts may refuse to uphold the contract.