Inkjets vs Lasers: Is a Shift Coming to Business Printing? 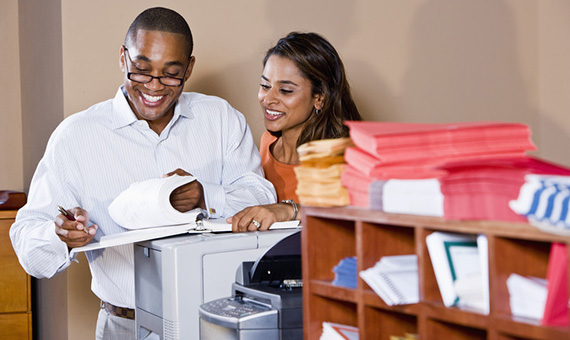 We decided to put these claims to the test and paired off the new Epson WorkForce Pro WF-4630 with the HP Officejet Pro 8620, both mid-tier printers designed with small businesses in mind.

The two printers were tested with the same workloads, connected to the same computer, with the same paper for each test. We also ran most of those same tests against our old office laser printer, an HP Color LaserJet CP 2025 (from 2008).

We didn't just want to look at which of these printers can produce the superior results, but see if inkjet technology has finally caught up to (or surpassed) laser. Here is a breakdown of what we found at each stage of the shoot-out.

HP: The HP setup quite easily. It's by no means a small printer, but is stylish. The touch screen was sharp and responsive, asking us to confirm the date and location.

When first initializing and aligning the new cartridges, the HP shook the table in an almost violent manner. Still, the whole initialization was done quickly, taking less than three minutes before it was ready to go.

Epson: The Epson still has somewhat of a retro look to it. While the HP has its controls exclusively on the touch screen, Epson has a physical number pad for the fax feature, as well as physical copy, reset, pause and interrupt buttons.

The touchscreen is slightly less responsive than the HP, but not by much. Epson did require some extra steps, such as selecting the type of printer paper for both the bottom tray and rear load. The Epson took over 10 minutes to finish initializing after the cartridges were installed, and while it didn’t shake the table quite as badly, the Epson was much louder.

HP: Installing the HP drivers from the CD took no time. I was able to connect the printer to the network through the touchscreen in only a few clicks. The entire process took less than 10 minutes.

Epson: I had serious difficulty connecting the Epson to the network. There are different methods laid out in the manual, but none seemed to do the trick. The touchscreen showed that it recognized the network, but would fail whenever the password was entered.

I attempted to connect the printer to a networked computer and have the printer pull the network information off the PC. I connected my laptop, but the installation software continually stalled trying to get the DNS information. I had to open a Command Prompt to find the DNS manually (something I'm sure not all business owners would know how to do). Even manually entered, it could not connect.

After about an hour-and-a-half I decided to skip it and test both printers through a direct USB connection instead. I changed the connection type in the settings, but it could not print a test, generating a 'printer is busy' message. I skipped the print test page step and the installation wizard stopped responding before crashing. Despite this, the installation seemed to have completed and the printer was ready to run through USB.

We used a 7-page document of random text. Using Calibri size-11 font, we scrambled the styling to include bolds, italics, underlines, strikethroughs and combinations of all the above.

While the HP Inkjet's pages look good, there is no denying the superior quality produced by the Epson. The text is sharp at all times while the HP's text can look a little blurry, especially when combining special conditions like strikethroughs on bolds.

Would I have noticed the quality of the HP's without comparing it to Epson? Probably not, but now I can't unsee the difference. That little bit of extra clarity makes a dramatic difference when the pages are laid side-by-side.

No, but it gets very close. On close inspection you can see that the laser still manages to pull off thinner lines in the text, giving it that little bit of a crisper finish. The difference is not significant, certainly not as significant as the difference between the Epson and HP's inkjet, but it is unmistakable.

We used the same document as above, but altered it with some of the least forgiving colours we could think of. We used yellow, lime green and teal highlights, light pink text, deep blue text which was struck-though, even a grey-to-white gradient font colour.

Between the inkjets, Epson wins hands-down. The HP inkjet just couldn't handle the level of details we were looking for.

With the HP, the highlight colours were inconsistent line to line, changing from a dark green to light green. When italics were highlighted, you could see white spaces around the letters where it couldn't get the colour ink to line up close enough. In general, highlighted text seemed smudged.

The Epson did a fantastic job handling the colours. It was clear that the highlighted text was not as sharp as the non-highlighted text, but the pages were readable and clear, while the HP inkjet's were a bit of a mess.

Not even close. When we began messing with the colours, we saw both inkjets drop somewhat in quality - just by different degrees. With the HP Laser, the text is as sharp as ever.

Admittedly, very few businesses will print the kind of document we used for this torture test. Still, it shows just where the technology gap still exists between the ink and laser printers.

For this test, I searched for an extremely high resolution image with lots of colour and texture. I choose a 3714 x 2929 pixel, 300 dpi image of a tiger from the Fort Wayne's Children's Zoo. We only ran this particular test with the inkjets, and used premium quality photopaper.

Both pictures turned out great. The printers produced exceptional quality, detail and colours. Either of these images could be framed, but if you're looking for a winner, it's the Epson again.

At first glance, it looks like the HP was going to take it. The colours looked more vibrant; they just seemed to pop. The Epson looked almost pale by comparison.

This was until we looked at the original. The bright colours stood out on the HP's copy, but they weren't that bright in the image itself. The Epson's print was truer to the image.

There was also the question of detail. There is a lot of complex texture in the image. Under scrutiny, the fur and eyes carried much more fine detail on the Epson.

PDF with Text and Colour

In this case, the Epson and HP inkjets look to have tied. The simple graphics had no rough edges and the colours were sharp on both. We did not even see any text differences, like in our first tests.

In this case, yes. The laser's treatment of the text was shaky, possibly due to the text being treated as an image. The rounded parts of the graphics appeared jagged on the laser's copy. When it comes to handling graphics, the inkjets have it.

HP and Epson have both produced quality inkjet printers. While there was a struggle with the Epson’s setup, the quality of both its text and image printing is undeniable.

The real question is, should small businesses start looking to inkjet printers over laser?

There isn’t a simple answer to that question. Laser has always been considered the top choice for text printing and our tests seem to confirm that – the newest inkjet printers still lost out to a six-year-old laser. The drawback is laser cartridges have a much higher price point than ink cartridges.

For the majority of businesses that mainly print text documents, if you currently use a laser printer that you’re happy with, there isn’t yet a reason to kick it to the curb. Inkjet technology is catching up, but it isn’t a laser-killer just yet. If, however, you’re in need of a new printer and are more concerned about price tags than ultra-sharp print copy, the Epson WorkForce Pro WF-4630 will get you pretty close to laser quality.