Canada is finally making the switch from paper to polymer bank notes.

Polymer notes, which were pioneered and introduced in Australia about 20 years ago, are much harder to copy than their cotton-based counterparts, are more durable, and do not curl or fray at the corners. The Canadian notes are expected to be among the most secure in the world.

Some new security features include: 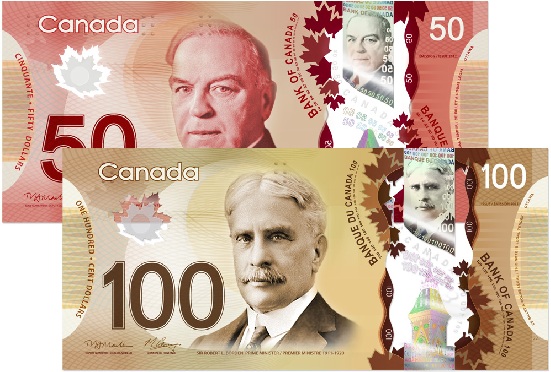 Besides security, there are other projected advantages to using the polymer notes. In a speech made at the bank's headquarters, Bank of Canada governor Mark Carney spoke of the financial and environmental perks of the new notes.

"We have independently verified that the environmental footprint of polymer notes will be smaller than that of currency made from cotton-based bank note paper," he said. "The new bills will last at least 2.5 times longer than cotton-based bank note paper bills, and after being removed from circulation, for the first time in Canada, they will be recycled into other products."

After the issuing of each bill, the Bank of Canada hopes to have as many older notes exchanged with newer ones as possible. Bank officials have said that the goal for the $20 bill, the most highly-circulated, is to have 70 to 80 per cent of the older notes out of circulation within 18 months of its release.

The following video, taken from the Bank of Canada website, provides tips on how to check if bills are real.