Franchising with a Difference 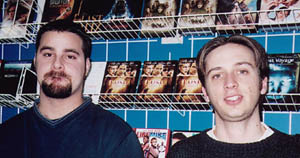 When Darryl Dirocco and Chris Bizzarro decided to go into business for themselves franchising seemed to be the way to go. For a set fee you can get a business with an established name and built-in reputation. However, the pair managed to find a business that had all of the benefits of a franchise and none of its drawbacks.

"We don't have a head office and we don't have any of those royalty or franchise fees," says Dirocco. What separates their business, a small chain of video stores known as Box Office Movies, is that it is a concept that can be purchased from it's original developer and then run as an independent business. This means that they have a brand name, and concept without having to pay royalty fees or answer to a corporate office.

While Dirocco and Bizzarro were able to find a proven concept without the red tape, there are thousands of Canadians who become entrepreneurs through the purchase of a franchise. Statistics show that a new franchise is opened every 90 minutes in Canada. And why wouldn't they? Rather than struggle to build a business from the ground up, a franchise gives you instant brand name recognition and a built-in customer base. For the parent company franchising is a way to expand their market without having to be physically present.

What's in a name?

Running a successful franchise takes more than plunking down the money for a recognized trademark. There are several important factors to consider when buying a franchise.

Michelle Collins was a staff writer at CanadaOne.