Retooling: The Reinvention of Leonard Lee

At the age of 67, you might think that Leonard Lee would have other things to do besides play sugar daddy to a relatively new business.

After all, in 1978 he founded Lee Valley Tools Ltd., a woodworking and gardening tools mail-order business that sells products across Canada and around the world. He developed the family-run company into a multimillion-dollar enterprise that now has more than 900 employees and 11 retail outlets from Halifax to Vancouver.

And in 1998, at the age of 60, when one might have expected him to be thinking of retiring, he established Canica Design Inc., which designs and develops medical instruments and products.

"I'm just the sugar daddy," said the self-effacing entrepreneur, who claims he created the business so he wouldn't have to retire. "I have fear of mall walking."

He decided to focus on medical instruments after Ottawa plastic surgeon Michael Bell bemoaned the fact that he could get more interesting and innovative instruments for woodworking than for surgery. Dr. Bell, who was using Lee Valley carving knives and other tools in surgery, invited Mr. Lee and several of his tool designers to his clinic. They looked at what Dr. Bell used and Mr. Lee decided he could do better.

So he launched Canica, which works directly with doctors to translate their needs into new products through a vigorous research and development program.

It was part of his exit strategy from Lee Valley. He turned over day-to-day operations of Lee Valley to his 42-year-old son, Robin, who has worked there since he was 15, and retired in all but name, still serving as chairman of the board.

Canica, based in Almonte, Ont., is not a retirement toy for Mr. Lee. He believed he could create a company that designed and delivered medical instruments that made a difference. "This is exciting work, developing new medical systems that save lives." 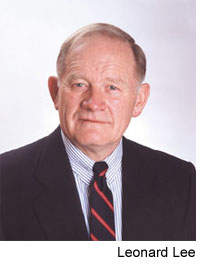 However, making a difference looked at first as if it might cost Mr. Lee his personal savings. He hired two designers and "drained the piggy bank" over the first three years because he had miscalculated the market for the scalpels, surgery system and wound-closure process the company produces. "I had no idea the medical industry was so conservative and did not function rationally."

The Canadian health-care system uses "silo budgeting," Mr. Lee explains. Individual departments within institutions have budgets but nobody looks after the broad spectrum or a vertically integrated budget. "There is no rational allocation of costs, unlike the open market system."

For instance, it can be difficult to sell a product like Canica's wound-closure system to an operating room because it only saves money afterwards, in intensive care or home care.

While Mr. Lee was trying to crack the Canadian health-care market, Canica bled red ink. Instead of giving up and retiring, Mr. Lee -- a self-admitted "stubborn" entrepreneur -- brought private investors on board, to the tune of $2-million, and began to target the U.S. health-care market, where providers are more interested in the total cost of health care and the market accounts for half the world's health-care spending, Mr. Lee says.

When the U.S. passed legislation requiring the use of scalpels that could be safely passed between doctors and nurses in the operating room, Canica designed a scalpel with a retractable blade that was also ejectable. The company has emerged from 90-per-cent of competitive trials for safe scalpels in the U.S. as the sole supplier, or one of two selected suppliers, and is now shipping $25,000 in scalpel orders each week to U.S. hospitals.

Mike O'Malley, Canica's director of research and development, developed a wound-closure system after a friend had an emergency appendectomy and his wound split open shortly after the operation. Mr. O'Malley realized surgeons used inelastic material to hold together elastic wounds. So he worked with Dr. Bell to develop the Canica Dynamic Wound Closure System, which is based on the elastic properties of skin. The system restores the skin tension that existed before cuts were made, the body doesn't reject it as it might a skin graft and infections are virtually eliminated. In addition, the patient becomes ambulatory faster.

Canica now has 15 employees, is cash flow positive and is on the verge of profitability. The wound-closure system has made such significant inroads into the U.S. market that Mr. Lee predicts its sales will enable Canica to soon turn a profit, as there really is no alternative to the product.

But Mr. Lee is not in it for the money. He won't draw one cent in salary until Canica is profitable.

Not content to rest on his U.S. market penetration, Mr. Lee is happy to report that the wound-closure system is being tested in Ottawa hospitals.

Now that Canica has demonstrated it can duke it out successfully against large U.S. medical supply companies on their own turf, it would be understandable if Mr. Lee thought of taking the company public to raise funds for a full frontal assault on the largest health-care market in the world.

But he scoffs at the idea. "I'll be dammed if I'm going to report to stock analysts who want to look good at your expense and force you do things in haste to make the stock look good at end of the quarter. That has almost destroyed business in North America."

Trying to follow a dysfunctional strategy of pumping up stock prices from quarter to quarter, instead of taking the long-term view, leads to disastrous management, he says. However, he admits not all privately held companies operate with a view to the long term and not all publicly traded companies operate "with short-term vision on stock prices."

Government, Mr. Lee says, is too often run in the same short-sighted way. "Burning endless dollars in the need to get elected is the equivalent of trying to boost stock prices for the next quarter. What else can explain some government insanity? Government -- federally and provincially -- is so dysfunctional at the moment it's the greatest problem businesses in Canada face."

This complaint does not come from a man who resents paying taxes. "I don't care about the tax rate, but how the government spends tax dollars."

One might expect that an opinionated individual who ran a large enterprise spread out across the country would find standing at the helm of a small business boring, even if the business is demonstrating growth potential. Nothing could be further from the truth.

Small businesses are more fun and flexible, Mr. Lee says. He finds the atmosphere extremely creative. In addition, he knows the names of all his employees, their partners and their children. And that's important to him.

Reflecting the intimacy of small businesses, Canica is located in a 130-year-old hardware store on the main street of Almonte, a community of about 4,400 people about 50 kilometres west of Ottawa. "We're 100 yards from a great restaurant and 50 yards from a wonderful bakery and there are no traffic jams," says Mr. Lee, who lives on a farm just outside of town.

Pressed to say when he might retire, he just laughs: Why would he when he still loves what he is doing?

"I'd hate to have a job that rotted your soul. It's better to be starving and working from home than making twice as much and hating going into work every day," says the man who considers his work to be his golden years.