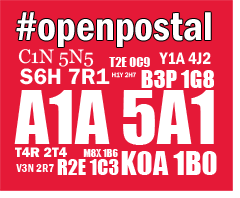 Update April 24, 2013: The Ottawa Citizen has reported that Canada Post has expanded the lawsuit described below to include a claim of trademark infringement, alleging that it owns the trademark for the words "postal code".

An important battle has begun in Canada over an essential piece of information: the lowly postal code.

Like me, you might be inclined to think of a postal code as a fact, part of the addresses for where we live and work.

Yet Canada Post has claimed that postal codes are not facts, but copyrighted works that it owns.

The postal corporation has sued Geolytica Inc., the creators of the Geocoder.ca postal code dataset, in Federal Court for what it alleges to be an unauthorized use of its copyrighted postal code data.

It is a case that has important ramifications for all businesses in Canada.

In a Cease and Desist letter sent to Ervin Ruci, the owner of Geolytica and creator of the Geocoder.ca dataset, Chloe Johnston, legal council for Canada Post, wrote:

"While everyone has an implied license to use Postal Code(OM) data for the purpose of addressing their own mail to be delivered by Canada Post, any other use is an infringement on Canada Post's copyright, except if Canada Post has granted an express license authorizing such other use."

He noted that copyright protection might extend to Canada Post's database of postal codes, that would only make copying all or a substantial part of that particular database a copyright infringement.

A question of copying or original creation

Ruci has stated that he did not copy Canada Post's data, a fact Canada Post disputes.

Rather, Ruci explained that he found an ingenious way to crowdsource his dataset that was completely independent from Canada Post in 2004 while doing a Masters in Computational Geometry at Carleton.

He started the geocoder.ca website as a hobby and the site later became a way for him to promote his programming skills when he incorporated his business in 2007. The postal code dataset has been a popular download and was requested over 19,000 times last year.

When Ruci received the demand letter he asked his advisors if Canada Post actually have copyright of the postal code. They said no, so he ignored the demand. The lawsuit has now opened up an important point of law for all Canadians.

"This [Canada Post's lawsuit] is something that will define the future of how we use postal codes," said Ruci.

David Eaves, a public policy entrepreneur, open government activist, negotiation expert and blogger helped break the story about the geocoder.ca lawsuit. The implications of postal code data, he has said, are significant for small businesses.

"Postal code data, with the exception of GPS data in your phone, it is the core infrastructure that is used in order to locate business and homes and locations," said Eaves. "When you have it and it is freely available, everybody can build services around it."

Canada Post has said its data sets are affordable. Yet when asked to confirm whether prices started around $5,000, a prohibitive cost for many small businesses, after initially offering to put me in touch with a business person for pricing Losier responded that they [Canada Post] were "not going to discuss this case any further at this time."

Pricing on the Canada Post website notes that a business site licence can be "... as low as $5,500/year" with other pricing options also available.

"I think the big businesses with money have been able to buy postal code data and incorporate it into the way that they work," said Eaves, "but if it were free, it would really, I think, lower the transaction cost for allowing small businesses to get smarter about rolling out those types of services and therefore allow them to become much more efficient."

"I think open data is very important for innovation," he said. "If you read what is happening in other countries as well, people are saying that the lack of open data is what is preventing innovation in technology."

"If we want postal codes to have a maximal effect on the economy by improving efficiency, the best way of doing that is to make them freely available," said Eaves.

When asked what other countries are doing, Ruci explained that Royal Mail in the UK went through a similar situation several years ago. He noted that the developer in that case did not fight the legal action, but a few years after the dispute the UK government forced Royal Mail to open up its data anyway.

Eaves explained that the federal government in the US is not allowed to license anything it creates, which helps to support open data initiatives.

The United States Postal Service (USPS), Ruci noted, "… has been giving away zip code data and its geocoded data for a long time…", an act he believes has helped drive innovations that have emerged from the US.

That leaves Canada one step behind and Canadian companies at a disadvantage at a time when the Canadian government is trying to foster innovation, efficiency and open government.

It also goes against Canada's Action Plan on Open Government, an initiative the federal government has put forward that is comprised of three streams – open information, open data and open dialogue.

The mandate for the open data stream states that the government will work to make raw data available to the public in machine-readable formats so that citizens, governments, not-for-profit and private sector organizations can "… leverage it in innovative and value-added ways".

Canada Post may be reluctant to open up its data, but the federal government – as well as the courts –have the power to open up postal code data.

"The minister actually has the power to intervene, as far as I can tell, in the Act," said Eaves.

When asked what he would like to see Canadians do in response to his situation, Ruci replied, "I just want Canadians go tell their government to give us our data back."

CanadaOne supports this initiative and is asking businesses to do three simple things to support having postal code data added to the open data project:

We asked Canada Post to answer one simple question: Is it the position of Canada Post that any and all use of postal code data, beyond addressing mail, must be expressly licensed?

They did not respond, even though further emails were answered. Based on the Cease and Desist letter that was sent to Ruci, and the lack of a forthrigtht response from Canada Post, we can only assume that their position is that postal codes are their copyrighted works and that Canadians only have the right to use those works for the purpose of addressing letters.

Canada Post's Statement of Claim (each page is listed under "the full scoop" at the bottom of the page)
http://geocoder.ca/?sued=1