The Boomer Bust: Working with a Fading Generation? 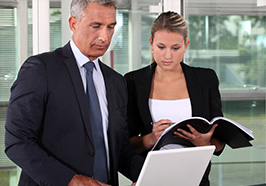 As a Boomer I have enjoyed razzing the Millennial generation. You can do that when you are the majority or if it is your name on the corporate letterhead (whatever that is.) But with 10,000 North American Boomers reaching retirement age every day, we are ever closer to posting a "Now Open Under New Management" sign on the bulk of the economy.

So maybe it's time to look at the issues Millennial bosses will face in their attempts to manage the remnants of the Boomer workforce.

Pointing out differences between the generations is fun and provocative but the real news I believe lies in the similarities brought on mostly by what I call technology induced leveling. We used to laugh about Boomers having flashing clock numerals on their VCRs. "Find yourself a sixth grader" was the solution most often suggested for Boomers with technology issues. That's no longer the case because VCRs have disappeared. And it is no longer the case because technology is no longer an oddity. It's everywhere. (My mother mentioned a conversation that she had with one of her friends in her retirement community about wireless routers. Go figure. Can you imagine two women in their 80's having a wireless router debate? If you can't, you had better get with the program.)

Technology is increasing our exposure to new ideas and new ways of doing things… technology is leveling out our differences. It is shattering the things that divide us, making us more alike than different. What influences the Millennial also influences the Traditional and the Boomer.

A generation is defined by its values and experiences as anchored by the music, media, and ceremony of the times. And the times are changing so fast that it may be impossible to name future generations.

Human beings don't play a single role. They play at least three: employee, customer, citizen. Talking only about the Millennial employee, for example, and ignoring the Millennial as customer and citizen doesn't give us a full picture.

For the sake of introducing a few additional observations we have to use broad strokes… yes, I know, I am bucketing which inevitably leads to inaccuracy. How do you ever talk about a generation without making dangerous generalizations?

My way. Right away. Why pay?

This is a generation raised in a time when it may seem that all things are possible. A recent news story announced that it is now possible to transplant a human head. Boomers will think "Frankenstein." Millennials will think, "cool!" In a world where all (or most) things are possible, it's no surprise that Millennials have expectations that Boomers would not imagine.

Millennials have grown up in an instant world. Boomers were wowed by the ability of FEDEX to deliver a package overnight. To Millennials it's a so what?

And when it so easy to play the Internet and gather all the information you need to be a truly formidable customer, Millennials have come to expect or at least negotiate outstanding value.

Here are a few more serious examples of issues at work defining our society:

Boomers are loyal to their boss and their job because they expect to keep both.
Millennials can be loyal but they prefer that loyalty be earned, not expected.

Boomers bought the idea that you should start at the bottom and work your way to the top.
Millennials? No sale! Forty percent of Millennials believe you should be promoted at least every two years regardless of your performance.

Boomers understand they must work when they are needed.
Millennials want to work on their scheduled time.

Boomers can work on teams but they expect their individual effort to be rewarded.
Millennials grew up working on teams where there were no losers, everybody is a winner. They like collaborative shopping and they tend to flock rather than date.

Traditionals and older Boomers grew up in households where, for the most part, men ruled the roost. When Women's Lib entered the scene, home rule became more a shared practice.
Millennial women now see men as a choice, not a requirement, especially when it comes to parenting. I see this as a marginalization of men, a change that may not prove positive.

Millennials are not nearly as interested in politics. (And when they are interested, they tend to be independent of the two major parties.)
Boomers are quickly catching up on the Millennials' apathy.

Millennials are amazingly ignorant of finances.
Boomers are sticking Millennials with huge student and government debt.

Millennials want to know what the score is constantly.
Boomers also like knowing where they stand.

Boomers haven't done a hot job at running the economy, government, or society as a whole. And Millennials look to be the untrained raw recruits sent to save the day. Both generations have a lot to learn and a lot to share but that isn't going to happen unless both generations adopt a new mantra.

How about this one? Have fun and make the world a better place.

T. Scott Gross is the author of Invisible: How Millennials Are Changing the Way We Sell. He is a popular speaker and story teller and in 2013 was honored as a "Legend of the Speaking Platform." www.tscottgross.com