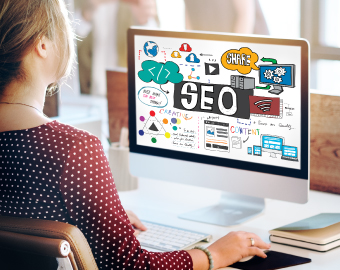 One of the things I have learned in my time doing SEO is that when you look at patents and algorithm updates it is best to not get caught up in the specifics, but rather, to concentrate on the problem the algorithm change was trying to solve and what changes did it make to the results. Google is well along the path of moving away from rankings based on strings to rankings based on things (entities).

An ambiguous query space occurs when the query entered could be for more than one “entity” (Person, Place or Thing). An example of an ambiguous query is “jaguar” which could be a user searching for the animal, the operating system, the car or the Jacksonville Jaguars football team to name just a few.

Business owners and managers who are heavily reliant on Google for leads or sales and have products or services with ambiguous query spaces should have already noticed significant changes to the Google results. As online marketing manager at Telsec business centres I noticed significant loses on many of our “office space” terms that resulted in a significant reduction in leads and enquiries for office space!

The biggest changes I've seen in my 20+ years of doing this is Google's switch from phrase based search to entity based search with the implementation of the Hummingbird algorithms and its use of the knowledge graph evolving past just answering questions to identifying entities in a document and associating the relationship between entities and themes/phrases.

Was it Possum, Disambiguation or a Combination of Several Algorithmic Changes

The Possum update was not a **verified** Google update which is an important point because although the changes were seemingly only to the "local results" some of us also saw some extreme changes to the whole SERP especially those that were “localized”. Many disambiguated SERPs went from being local in nature to having most of the “Universal Search” elements. Universal Search elements include map results, shopping results, news results, video results and image results.

A localized SERP primarily has listings in the user’s local area in the organic results not just the 3 map listings generally at the top of the results right after the ads. For instance one of the main terms I monitor is Office space which is an ambiguous "entity" because of the popular movie "Office Space". Previously a person searching for office space would see local business centres and coworking space providers and a few local office space directories.

There is no way to confirm that Google changed the way they generate local rankings causing these extreme changes, however, there are strong indicators that disambiguation of entity-based SERPs is at least one factor in the extreme cases.

Although the changes I saw in these particular SERPs seemed to be what the community was describing as Possum changes I still had this nagging feeling that there was something more to the changes than allowing close by competitors and loosening the restraints on like services at the same address (which never made sense to me!).

What I was seeing was what looked like the query had changed from being a localized SERP with a large percentage of local direct Office space rental providers to a blended search where location of the business had been dampened to the point that aggregators and classified sites had moved significantly higher.

About the end of July of 2017 this changed to being a Universal SERP and even more surprising is that "Toronto office space" (no quotes) and many of the other Office space modifiers also changed from being mainly direct local office space providers to a SERP including office space aggregators, classified sites (kijiji and Craigslist) and a few direct office space providers. What was at the root of my feeling that there was more to this was how the results had changed. I first shared this with other colleagues working in the query space in SEO 101: Understanding Google Office Space SERPs it was as if "location and distance" had been removed from the SERP.

Google Meets the Ambiguous Query Challenge with the Disambiguation Box

Then one day I was working with the SERP and I noticed a new entry under the Knowledge Panel for "Office Space" the movie. There is a "See results about" box with a picture and a link to Wikipedia. At a few points along the discovery trail I wondered if the ambiguous nature of the "office space" query was somehow connected to the changes in the query space. I refer to this new box result as the "disambiguation box". 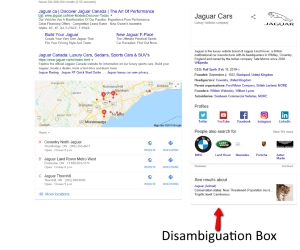 Above is a partial screenshot of the “jaguar” SERP with the “See results about” disambiguation box. 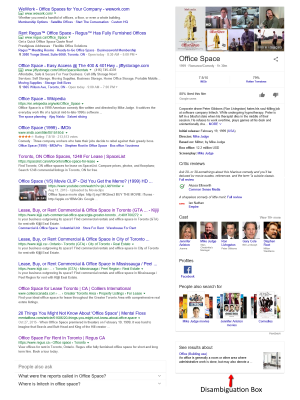 Note the disambiguation box in the “office space” SERP above disappeared around the first of March which indicates this change is being monitored by Google and they are still adjusting the query space.

At the beginning of my discovery for why the changes occurred I found an aggregator in British Columbia in the "Toronto Office Space" (without quotes) Local pack. This only lasted for a few days but it was the first indication that the "localization" that was added to a lot of query spaces many years before the Possum update had undergone significant change.

To take this a step further I turned to Doc Sheldon whom I knew could give me results from Mexico and California and members of the SEO Dojo skype chat where we found that pretty much any location you searched from Google were providing the same results!

This is a strong indication that "localization" of ambiguous SERPs beyond the Local Pack had been dampened. The Local Pack is the 3 map results at the top of the SERP with the locations indicated on a map and right after the sponsored ads. In the “jaguar SERP above they are the listings below the map.

In all cases that I've seen the “See results about” or, as I refer to it, the "disambiguation box" the result was an ambiguous query space. The “disambiguation box” had a link to a Wikipedia page about the secondary/other entity.

That link to Wikipedia is important to note because the "office" page, and generally for all ambiguous terms, Wikipedia provides a link to information about the second/third entity or possibly more.

Google also uses Wikipedia to discover entities and learn about associated words and data/knowledgegraph points. For Google to be using Wikipedia to identify ambiguous queries and disambiguate the SERP seems like a natural given it is a primary source for identifying entities.

Another characteristic that I have noticed about disambiguated SERPs was that the stems (plurals etc.) produced totally different results. For instance if you search for Jaguar a large percentage of the blended SERP is Jaguar Dealerships and Jaguar Company sites. In general prior to SERP disambiguation Google was generally thought to be not plural or stem sensitive, meaning, plural terms didn't **usually** return different results.

Seeing that I thought I'd try panthers which has both a hockey team and a football team. The interesting detail here is that it returned (to my astonishment) only 2 results related to the hockey team and the hockey team was the entity in the disambiguation box. Note this search was done about 5 days after the Carolina Panthers owner had blown up in the news because of a scandal which forced him to put his share of the team up for sale.

However, if you search for apples the #1 result is still Apple Corporation (the computer company not the Beatles Company). The knowledge panel is for apples the fruit with the organic results being a blended/Universal SERP for the fruit. Another interesting detail is the local results included an apple store, an orchard and a grocery store. So in this case the Local pack wasn't disambiguated I was expecting to see the Apple Company as the disambiguation box entity, however, it was the apple plant.

How are Primary Entities Identified in the Query Space?

I have been studying the use of click data in SERP composition well before Universal Search was announced and we started seeing the blended SERPs associated with it serving up SERPs that contain results from almost all of Google's Vertical Search Indexes for news, shopping, video, local and images.

I first encountered Google’s use of click data in the SERP composition working for a pajama apparel company. I started with the company just as peak season was upon us. However, around May I started seeing Wikipedia and non-retailers move up the SERP as retailers moved down. This seemed to reverse in late August culminating in the first page being all retailers and the Wikipedia result mid page 2 around Christmas. While trying to discover the reason for this I realized that the number of transactional queries started falling in May.

Watching click analysis and queries has led to my belief that Universal Search SERP components are partially determined by click data. IMO, Google has collected a huge amount of click data over the years. It makes a lot of sense that what people click on should be used to determine what to include in a Universal SERP. It is also why I believe adding a video to YouTube in a query space with no video will often result in the video ranking because Google wants to see if it should have a video in the SERP. Whether it sticks is determined by click analysis and click analysis can make it rank higher if users indicate a preference for video over other types of content in the SERP.

One of the reasons that I believe click analysis plays a big role in composing these SERPs is how often when you search for plurals you get different results. IMO, it makes sense to use what people click on in a SERP to determine its Universal Search Components and further more of click analysis before disambiguation of the jaguar query indicated that plural searches were for the football team then it seems logical to serve mostly the Jaguars football team after disambiguation of the SERP. Another indicator is the apples query space where the #1 result was for the Apple device company but all other results were for the fruit.

From what I have seen to date there are indications that what was called the Possum Update and thought to be a local search update was possibly to some degree the result of the SERP disambiguation process and the removal of dampening based on type of business and location distance from user location. I'm not saying that there was no Possum local update. I believe there was a local update, however, I also believe there has been a change in the way local Search uses "location and distance" in ranking or including sites in the results. This would account for some of what was attributed to Possum the recent Google **unverified** local update.

For business owners that have experienced these sorts of setbacks one way to start to correct it is to get listed in the directories, classified sites and aggregators that are now ranking in the SERP. These citations provide 2 benefits. One benefit is that any links from these sites are generally higher quality with the secondary benefit being that if you can’t rank #1 you can be found on the site that is #1 which is the next best thing if that’s where customers are going first.